Well, it’s all over with, for another year.  The 2011 International Tree Climbing Championship was held in Parramatta, on the 23 and 24 July: the first time that the world competition has been held in Australia.  Due to concerns about daylight, part of the preliminaries were scheduled to be run on the Friday afternoon, but unfortunately steady light rain prevented this from taking place.  It is a credit to the organizers, judges, techs and volunteers that despite this setback, the entire field of 62 climbers completed the preliminaries comfortably on time by the end of the Saturday afternoon, and we were able to follow the normal Sunday program.

So, how did it all go?  The full score sheet can be downloaded here or by clicking on the image below, but suffice to say that roadtrippers Scott Forrest and Kiah Martin made it through to the Masters Challenge, as well as into trees climber Joe Harris.

The Women’s Masters was won by Chrissy Spence from NZ (her third world title), with Jessica Knot (Aus) and Kiah Martin (Aus-AP) taking second and third place, in a complete sweep for the Asia-Pacific region.

The Men’s Masters came down to a knife-edge finish, with the top four climbers placing within two points of each other.  In the end, Scott Forrest of NZ won the 2011 ITCC Men’s Masters Challenge, and is the new world champion, with Joe Harris (Aus) second; Jon Turnbull (UK) third; Johan Gustavsson (Swed) fourth and Jared Abrogena from the Western Chapter in the US taking the fifth place after some bad luck during his climb.

It is a testament to the world-class level of tree climbers in both Australia and New Zealand, that 5 out of the 8 Masters competitors in the two categories came from these two countries.  James Kilpatrick (NZ – Asia Pacific) was also in the top ten, despite really bad luck in the Aerial Rescue: a footlock of 13.66 (0.01 seconds slower than his own world record!) certainly helped him to get him back in the points.

Photos and video to be posted here soon – watch this space. 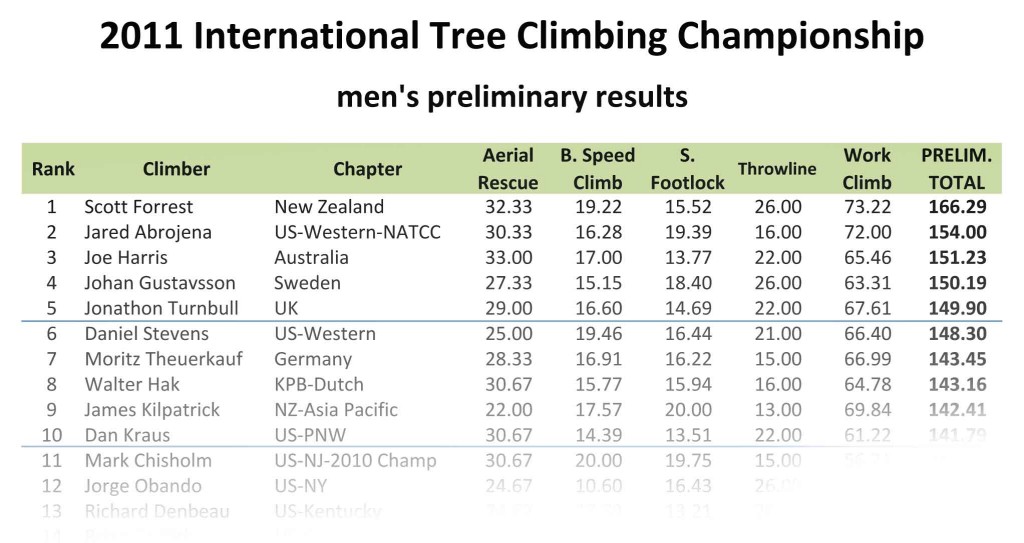